Hi guys! Today I’m coming at you with a super special post – my S/O Olly agreed to write a post! They’ve been gushing about this book ever since they read it, and while it’s Pride month I figured it was the perfect time for a post. So without further ado, here they are!

The moment I was shown this book I knew I had to have it, and boy does it feel good to have a book that makes you feel seen. From the colour coded covers (purple and yellow!) to the constant emotions I had going on, I hated to put the book down for a moment. To be honest finishing the book was more upsetting than anything else.

Mason managed to capture the struggles that are attached to coming out as non-binary – the fear that no one will accept you because they don’t understand – but then when you finally tell someone, and they hug you and tell you that everything is okay, nothing is better than that moment. But they didn’t strive to write a book that paints a world written with nothing but positive outcomes; they wrote one that contains the fears and disappointment of being rejected by people you care about.

When Ben is abandoned by his parents he calls his sister, and after ten years apart you can imagine the strain that has put on their relationship, but throughout the book we slowly get to see them reconnect. Like any siblings you can imagine the ups and downs that occur throughout the whole story, but one area that I liked was how they eventually began to bond over their parents – I think everyone can relate to the idea of feeling misunderstood or having their thoughts and feelings being disregarded by their parents. This is one of the many aspects of Ben that helped me feel like I related to them.

A key storyline throughout the book is mental health, more specifically how Ben manages to deal with and manage their anxiety. The book avoids any form of glorification of the subject, but in fact shows a genuine look at how someone suffering struggles with day-to-day life. You see how Ben goes through the highs and lows, and you see how everyone around them is just wanting to help and support them through it. Mason managed to avoid the idea that someone suffering should be pitied or handled with care. Being someone who struggles with anxiety on a day-to-day basis, seeing Ben struggle and watching them work through it helps.

Of course, no book is complete without a romance. The relationship between Ben and Nathan is the kind I don’t think you see all too often – not one from a distain for each other, but one that took time to grow. From the synopsis it was obvious about their relationship, but I guess I wasn’t expecting Nathan to always want to be there for Ben. He was always willing to do anything for them, to take care of them. Their first kiss was one of the best moments I’ve read in any book. There were no fireworks and the kiss wasn’t perfect, which isn’t something that you see that often in media or literature.

“He leans in, and well, it’s sort of terrible. Our lips meet, but we moved too fast and bump noses, and Nathan catches my bottom lip. It’s rushed and wet and really messy. But the good kind of messy.

There are no fireworks. Time doesn’t stop. And I don’t mind.“

Having this book on my bookshelf has never made me feel prouder. It’s a book that hits so many key aspects of life that are affected once you come out, and just the struggles of navigating a teenage life. I’m looking forward for Mason’s next book, which (if I’m not mistaken) is out next year!!! 2020 is going to be a good year for books (for me at least) and I’m all here for it.

When Ben De Backer comes out to their parents as nonbinary, they’re thrown out of their house and forced to move in with their estranged older sister, Hannah, and her husband, Thomas, whom Ben has never even met. Struggling with an anxiety disorder compounded by their parents’ rejection, they come out only to Hannah, Thomas, and their therapist and try to keep a low profile in a new school.

But Ben’s attempts to survive the last half of senior year unnoticed are thwarted when Nathan Allan, a funny and charismatic student, decides to take Ben under his wing. As Ben and Nathan’s friendship grows, their feelings for each other begin to change, and what started as a disastrous turn of events looks like it might just be a chance to start a happier new life.

At turns heartbreaking and joyous, I Wish You All the Best is both a celebration of life, friendship, and love, and a shining example of hope in the face of adversity.

So guys, what did you think of Olly’s writing? Should I have them around more often? Want them to kick me off my own blog and take over? Let’s talk in the comments!

A nerd who loves computers, DnD and other stuff. But probably has no clue what they're talking about. OH! Also non-binary :) View all posts by Olly

2 thoughts on “Guest Post! | A Non-Binary Review of I Wish You All The Best by Mason Deaver” 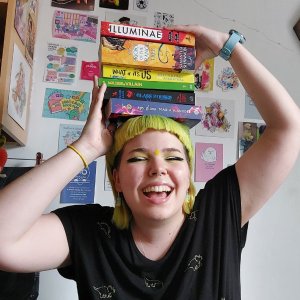 Check out the bookish wares on my Etsy store!

Get a 60 day free trial of Scribd’s ebook and audiobook service!